The implementation of the Syrian regime’s strategy of affecting demographic change through confiscation of property that belongs to displaced Syrians continues across Syria. The example of Eastern Syria clearly shows the systemic nature of this policy which goes far beyond just random operations of local executive bodies in the regime forces. The reconciliation agreements for the besieged opposition areas in southern and central Syria are an example of the regime’s commitment to the policy of demographic change, intensively supported by its allies. Since 2016 the population ratios in some cities covered by reconciliation agreements declined frighteningly, with the vast majority of the original inhabitants turned into displaced persons inside Syria and abroad.

Since the Syrian regime issued the Decree No. 66 in 2012 to “modernize informal and unauthorized housing areas” (the immediate aim being to destroy two large areas in Damascus known for their opposition to the regime, the first behind Al-Razi Hospital on the Mezzeh Highway, and the second near Al-Qadam neighborhood) the discriminatory laws and decrees have been consistently used to strip the displaced of their properties in various Syrian governorates.

The resulting reality is particularly stark in the eastern regions, and in particular in the city of Deir Ezzor. The Syrian regime issued many laws to facilitate this, perhaps the most prominent is the Law No. 10[1], which nominally aims to establish organizational zones throughout Syria, designated for reconstruction.

The law does not specify criteria for classifying an area as a regulatory area, or a timetable for designating such areas. Instead, the regions are designated as “organizational regions” by decree. Within a week of the issuance of the decree to reconstruct an area, local authorities must request a list of real estate owners from government real estate agencies operating in that area. Agencies must submit lists within 45 days of receiving a request from the local authorities.

Law No. 10 entered into force in the Eastern Province at the end of 2020. On December 15, 2020, the subcommittee of the branch of the “Baath Party” in Deir Ezzor held a public auction to “promote investment” in the lands of the city of Mohasan in the eastern countryside of Deir Ezzor.

The auction took place in relation to an area of ​​3,500 dunums in the Nahama and Al-Dana areas, which are agricultural areas belonging to the people of the city who used to cultivate different crops before they were displaced from their city, which was known for its opposition to the Assad regime during the Syrian revolution. Following this, on December 30, 2020, an auction was held of the properties of the city’s residents who fled the bombings and deliberate destruction of homes and properties, especially those wanted by the security forces, since 2011 until now.

The Law No. 10 is not the regime’s only tool for controlling the property of the displaced, with the significant increase in the direct exercise of power by the Iranian militias which now dominate the region. The so-called “Shiite Endowment in Deir Ezzor” confiscated agricultural lands in the western countryside of Deir Ezzor that belong to the displaced in order to invest in tourism projects for the Iranians and Iraqis in the province.

The “Shiite Endowment in Deir Ezzor ” seized 14 hectares of agricultural lands around the site of “Ain Ali shrine” in the western countryside of Deir Ezzor, with the aim of investing them in tourism projects for Shiite pilgrims.

The private sources of the Syrian Association for Citizen’s Dignity added that this appropriation will be operationalized by agents accredited by Iranian Revolutionary Guard officials in Al-Bukamal and Al-Mayadin area. A hotel, restaurants and a car garage for the Iranians who will come for religious tourism will be established in the “Ain Ali shrine”[2], which will be built on lands owned by displaced people from the region.

Iranian militias which control and administrate the villages, cities, and towns of the West Bank of the Euphrates River in Deir Ezzor together with the regime forces, have seized numerous homes of civilians, and made it military headquarters or residence for its militia members.

Following a similar exercise in the Muhasan district, the militia informed the landowners in the areas of Hawi Mahkan and Al Majari in the outskirts of Al-Mayadin, and the villages that belong to Al-Mayadin city, to come to the security centers and present the proof of ownership of the land. After that, it confiscated the lands of the owners who did not attend, the vast majority of whom were displaced outside Deir Ezzor or to the east of the Euphrates. Later, it rented the confiscated lands to relatives of its local members and other people close to the militia, for their investment and cultivation.

It is noteworthy that the pro-Iranian groups, led by factions within the Iraqi Popular Mobilization Forces, who enjoy wide military influence in the border area between Syria and Iraq, on the west bank of the Euphrates River and on the border of Deir Ezzor Governorate with Iraq, are playing an increasingly active role in the confiscation of properties of displaced Syrians from the area. Notably, the commander of the “National Defense” militia in Deir Ezzor, Firas Al-Iraqia (Al-Jaham), has recruited a number of people to control agricultural lands in the eastern line of Deir Ezzor governorate. Firas Al-Iraqia signed a number of investment and commercial deals for the Iranian militias deployed in Deir Ezzor under the cover of reconstruction and rehabilitation of the area. In parallel, the Farmers’ Association in the city of Al-Mayadin, east of Deir Ezzor, informed the farmers of the city of Al-Mayadin and its countryside that they have to bring identification papers and contracts proving the ownership of their lands, and issued an official paper for the “investment” in the confiscated lands.

Under this mechanism, the Syrian regime and the militias will be able to seize the lands belonging to people wanted by the Assad’s regime and from refugees and displaced persons who now live in areas outside the Syrian regime’s control. It is worth noting that committees from the Assad regime’s Agriculture Directorate visited the cities of Al-Mayadin and Al-Bukamal during the past month, to review the situation of agricultural lands and take decisions regarding them.

Ominous warning for the future of Syria

These measures taken by the regime during the past year show a systematic effort to employ different tactics to prevent the displaced from returning and to work hard to seize their lands and properties by “legal means” or by force, while empowering their Iranian allies and the militias in the area to further cement their influence.

On August 27, 2021, the Syrian regime actually began implementing a real estate survey plan in the eastern countryside, where properties were divided into Category (A) and Category (B). Category (A) includes properties that will be sold at the public auction, and Category (B) includes properties that will be confiscated by militias affiliated with the regime. All this is coordinated closely with the security services, as all names are presented to the political Security branch in Deir ez-Zor for it to take necessary action.

Hence, the evidence from the ground clearly illustrates the reality in which the Syrian regime is implementing these policies under the guidance, support and sponsorship of its allies such as Russia and Iran, which are considered as “guarantors” of the Astana process.

What is also becoming increasingly clear from the example of Eastern Syria is that rest of the international community bears the responsibility of watching silently the implementation of the Syrian regime’s plans to prevent the return of refugees. There is no adequate reaction to the actions of the regime and its allies, which allows them to enact laws fundamentally restricting the rights of the displaced, to expand the influence of foreign militias and consolidate their presence on the ground, and to facilitate the passage of time which affects the displaced themselves so that their adaptation and connection to their new places of asylum increases over time, especially in countries that allow the displaced to live a normal life and support integration programs.

Giving the regime more time to tighten its grip on the country will not, in any way, lead to a state of political stability in Syria. Rather, it is a desperate attempt to delay a new explosion.

The procedures for seizing the property of the absentees acquire the status of “de facto” through the passage of time and the lack of seriousness of the international community in dealing with this crisis. These arbitrary measures allow the regime to consolidate its policies and give it the appearance of local legitimacy after the theatrical play of the last presidential elections. But ultimately, they will result in new, extremely difficult obstacles to the rights of the displaced once the stage of reconstruction is reached in Syria, as well as further complicating the process of the safe and dignified return of the displaced, creating conditions for further instability and conflict.

[2] “Ain Ali Shrine” is one of the most prominent religious shrines and holy places for the Iranian militias in eastern Syria. 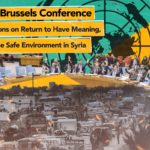 SACD to Brussels Conference: For Discussions on Return to Have Meaning, There Must be Safe Environment in Syria 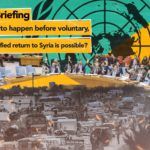 What needs to happen before voluntary, safe and dignified return to Syria is possible? 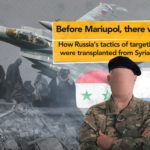 Before Mariupol, there was Douma: How Russia’s tactics of targeting civilians were transplanted from Syria to Ukraine 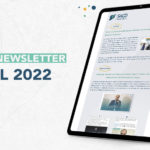 Thank you for your time, your comments will be taken into consideration in the following sessions.